Day Trip To Windsor From London – Things To Do In Windsor

Which is the best place to visit outside London on a trip to the United Kingdom? Windsor is one of the most exciting towns to visit with its large royal park, attractive shops, cosy pubs, and tea rooms. It also has Windsor Castle, the oldest castle in the world still occupied by the family for whom it was built – the British Royal Family. 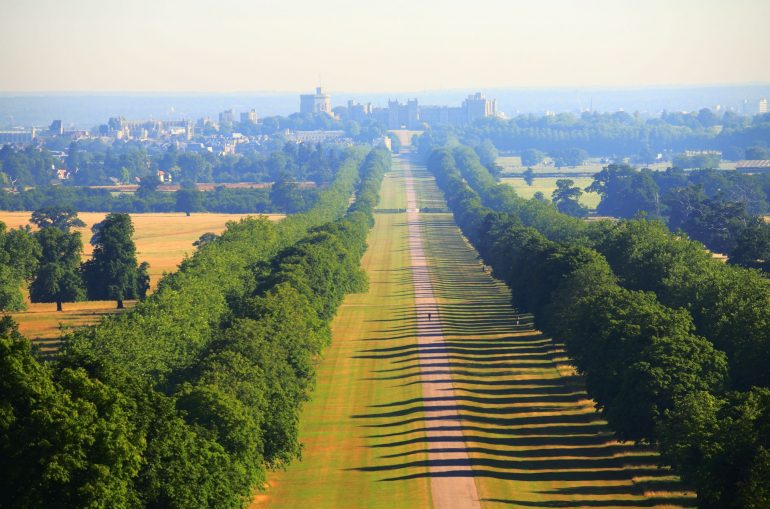 The British Monarch spends a large part of the year at Windsor Castle and is based there in early summer. If the Royal Family are at Buckingham Palace in London for official duties during the week, they often go to Windsor Castle at the weekend. As soon as the monarch arrives, the Union Jack is taken down from the flagpole that flies from the Round Tower in the centre of the castle. It is then replaced with the royal standard so you can tell if the sovereign is in the castle simply by looking up at the flag.

Windsor Castle contains the State Apartments of the monarch, which can be visited on most days of the year. Here you will see portraits of previous monarchs by painters like Hans Holbein, Antony van Dyck, and Peter Lely, as well as the work of artists such as Peter Paul Rubens. Visitors to the State Apartments can also see carvings by Grinling Gibbons and Gobelins tapestries, all part of the Royal Collection.

The State Apartments were built in the late 1600s for King Charles II and remodelled around two hundred years ago for King George IV, who spent most of his later life at the castle. This was after the wars with Napoleon’s France, and a room called The Waterloo Chamber was built inside the apartments to celebrate the final victory over him at the Battle of Waterloo in 1815. Leaders of the allied forces are portrayed on the walls of this room.

A fierce fire burned through the state apartments of Windsor Castle on 20th November 1992 in what the Queen referred to as her ‘annus horribilis’ (horrible year) when extensive damage was done to the apartments and temperatures reached 800 degrees centigrade. Over 200 firefighters were involved in putting out the blaze, and following a £60 million programme, the castle was completely restored.

Queen Mary’s Doll’s House is a popular part of a visit to the state apartments. It was designed by the distinguished architect Sir Edwin Lutyens on a scale of one to twelve, and most of the items inside the house are in full working order. Writers like Rudyard Kipling and Sir Arthur Conan Doyle contributed original works to the library, while paintings were given by contemporary artists when the house was built in 1924. Queen Mary was known to be very fond of miniatures and was delighted with her doll’s house, which can be seen near the entrance to the apartments. 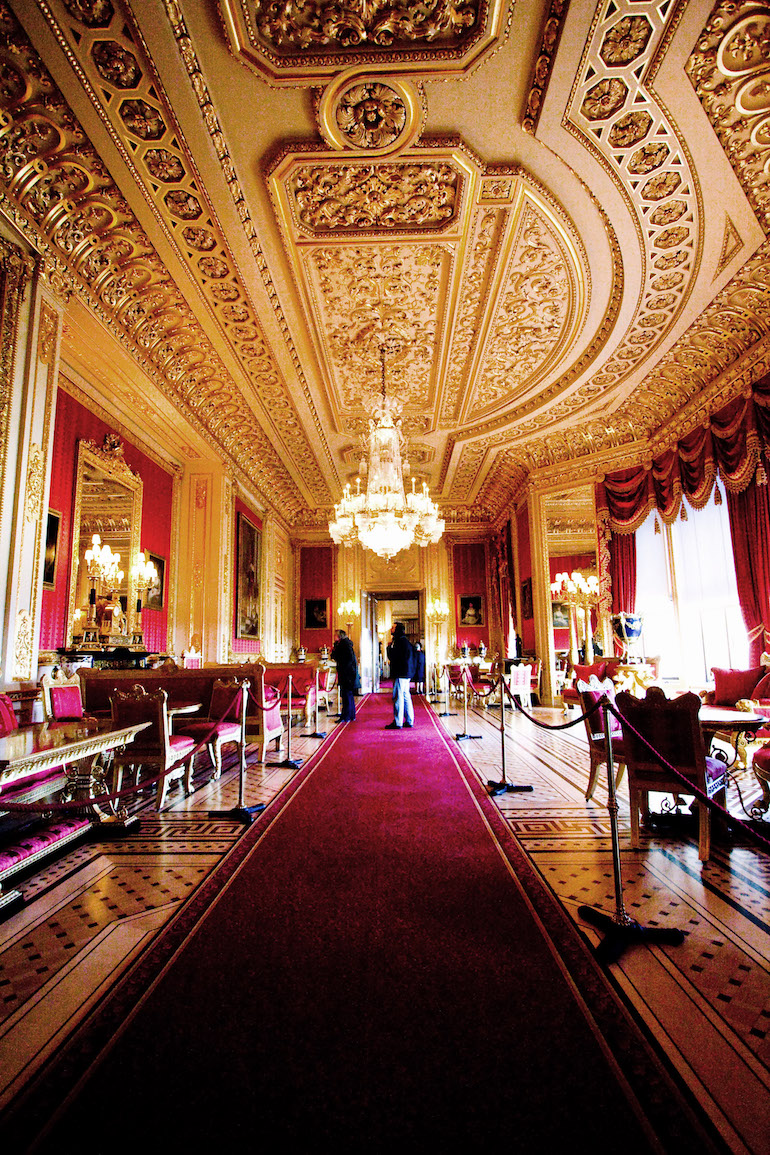 Saint George’s Chapel on the grounds of Windsor Castle is well worth a visit, and entry is included in the cost of a ticket to Windsor Castle. The chapel houses the graves of Prince Philip, the late husband of Queen Elizabeth II, and those of her sister, Princess Margaret, and her parents, King George VI and Queen Elizabeth The Queen Mother. Her grandparents, King George V and Queen Mary (she of the Doll’s House), and her great grandparents are also buried in the chapel, as are earlier monarchs such as King Henry VIII and King George III. The chapel is the third on the site and is built in the gothic perpendicular style of the late 1400s.

In Saint George’s Chapel hang the flags of members of the Order of the Garter, the oldest order of chivalry in Britain, which was founded at Windsor by Edward the Third in 1348. The garter is the highest honour granted by the British monarch and is often given to former Prime Ministers and heads of state from outside the United Kingdom. There is a maximum of twenty-six knights at any one time, including the sovereign and Prince of Wales. The motto of the Order of the Garter is in old French: ‘Honi soit qui mal y pense,’ which is often translated as ‘Evil comes to him with evil thoughts.’ Saint George’s Chapel was the wedding site in 2018 of Prince Harry and his American wife, Meghan Markle. Their first child Archie was christened at Windsor, and the couple lived near the castle at Frogmore Cottage before moving to the United States. 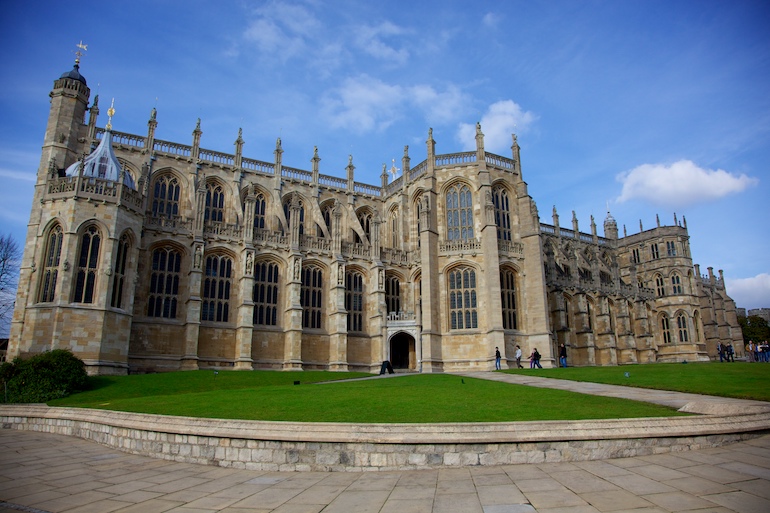 Changing Of The Guard

The Changing of the Guard is a popular feature of a visit to Windsor Castle, and many visitors gain a better view of it here than outside Buckingham Palace, where it is often crowded. The ceremony typically takes place inside the castle on Tuesdays, Thursdays, and Saturdays between 11:00 and 11:30 am. You can see the soldiers and band as they march through the town towards and out of the castle.

Take a walk through Windsor with a Blue Badge Tourist Guide, and you can see the barracks where the guardsmen are based when not wearing their colourful scarlet uniforms and standing on duty at the castle or parading through the streets. These men are serving soldiers in the British Army who have the extra duty of standing guard at the royal castle in Windsor. Visitors to the castle can often see them marching through the castle but should never stand in their way as they go about their business! 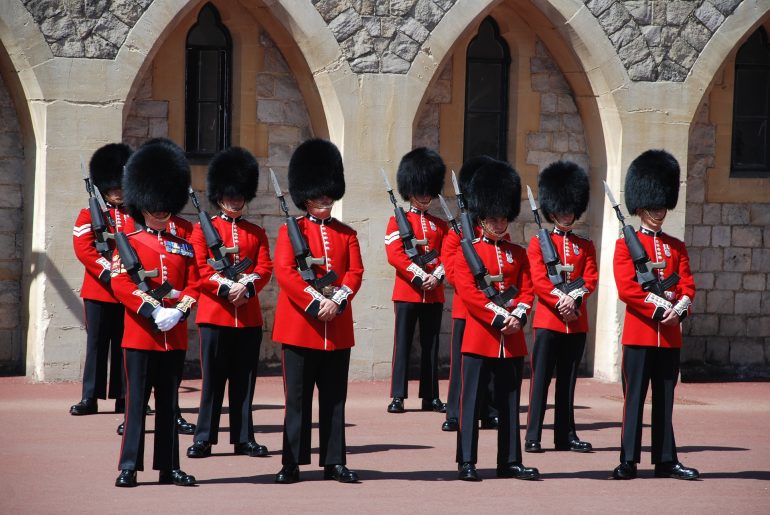 Changing of the guard at Windsor Castle. Photo credit: ©LucieLucy/Pixabay.

Other things to do on a day trip to Windsor include visiting the shop site where the writer H. G. Wells worked as a draper’s assistant when a young man, later recycling his experiences into a story that became the popular musical Half a Sixpence.

Besides its pubs, shops, and tea rooms, Windsor contains a small public park where a statue of Queen Elizabeth the Second can be seen. At first, the statue seems to be of a normal middle-aged woman until you realise that it is indeed Queen Elizabeth with some of her beloved corgi dogs. The statue is entitled The Windsor Lady and was made by a local sculptress called Lydia Karpinska. It was unveiled in Bachelors Acre Park in Windsor as part of the Queen’s diamond jubilee celebrations in 2012.

Outside Windsor Castle is Runnymede in Windsor Great Park. This is where King John agreed to the terms of the ‘great charter’ of 1215, generally known by its Latin name of Magna Carta. Here you can see the approximate site where John met the Barons of England and was forced to agree to their terms. Although neither John nor the Barons had any thoughts of the common people, Runnymede is often seen as the birthplace of democracy, and the right to trial by jury, for example, was established here. Nearby runs the River Thames, and above stands the RAF Memorial Chapel dedicated to the airmen of the Royal Air Force who lost their lives but have no known graves, all of their names inscribed on the chapel’s walls.

For a day trip to Windsor from London, take the train from Waterloo Station or Paddington Station. Windsor Castle is right in the centre of town, and a short walk from either of its two railway stations and the large coach park. London Blue Badge Tourist Guides are trained to conduct tours of Windsor Castle, to explain the origins of the Order of the Garter, and to introduce visitors to the town of Windsor. 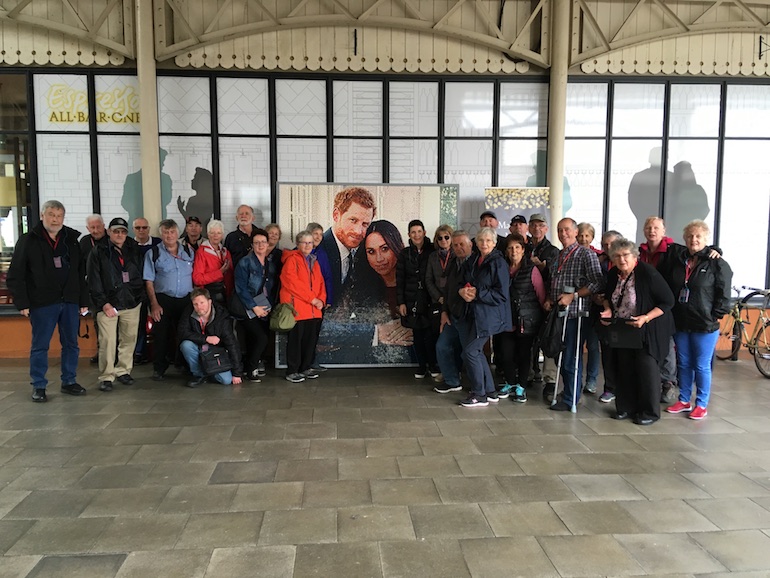 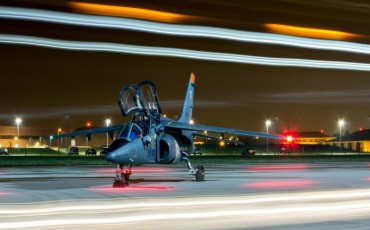