On a rather dreary and wet day, two dozen Blue Badge Tourist Guides met in the foyer of the National Theatre for a “behind the scenes” tour. We were split in two groups, all dressed in fetching high viz jackets. Even before we set off our little band was buzzing with excitement, as we were promised a goody bag full of information leaflets on our way out.

Our group was led by the lovely Chris, who had an incredible knowledge of every play ever performed in the National Theatre. He did find a match in our own Pepe Martinez, who seems to have seen every performance since the 1980’s. We started off in the Lyttelton theatre, currently showing Man and Superman which had just opened to five star reviews. Chris very bravely asked for questions and even when we explained the danger of this request to Blue Badge Tourist Guides, his guiding was always a dialogue, never a lecture, and full off interesting titbits.

I had never quite realized that both the Lyttelton and the Olivier theatre show at least two shows a week in repertoire, so that sets needs to be moved regularly. Hence the enormous area behind the Lyttelton stage and the ingenious pulley systems to hoist unneeded scenery out of harm’s way. We continued past the rehearsal studio and the many workshops hidden within the bowels of this building. 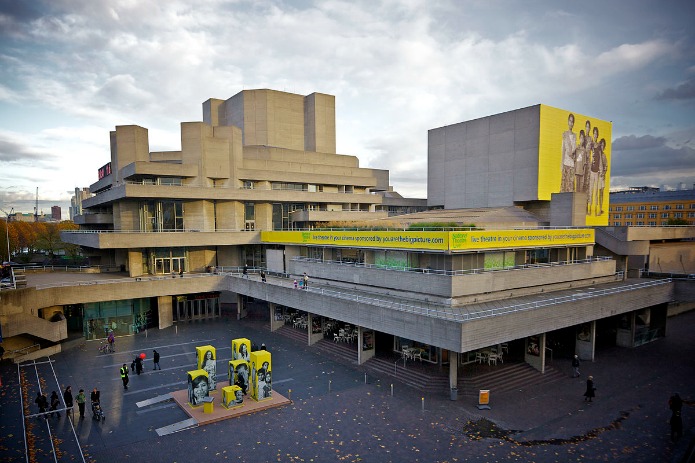 The National Theatre is very unusual in having in-house prop and set building. Some of the stage magic may have been spoilt forever, when some beautifully carved wooden angels turned out to be nothing more than moulded foam with a nice paint job. On the other hand, nobody was allowed into the weapons workshop, where all the swords and guns are real and health and safety does not allow visitors. (The guns are made safe, obviously).

We also saw the famous Olivier ‘drum’, an enormous revolving round stage that wasn’t used to its full potential for many years. As it was the first in the world, nobody knew how it worked! The Olivier theatre is the largest at the National Theatre and was based on the amphitheatre in Epidaurus. Laurence Olivier himself only stepped onto the stage once: to welcome the audience at the opening of the building. The purple seats are in his honour though, it was his favourite colour.

A few other things that we learned:

* The Cottesloe theatre has been renamed the Dorfman Theatre.

* The temporary wooden red building on the Southbank is no longer called “the Shed”; that name was on loan for only a year. The building is used for experimental performances and for conferences/workshops.

* A new walkway has opened inside the National Theatre. It is freely accessible and shows some of the workshops behind the scenes. You are allowed to take visitors in, although there is a maximum of 60 people allowed at any time. Entrance on the first floor at the Dorfman entrance. 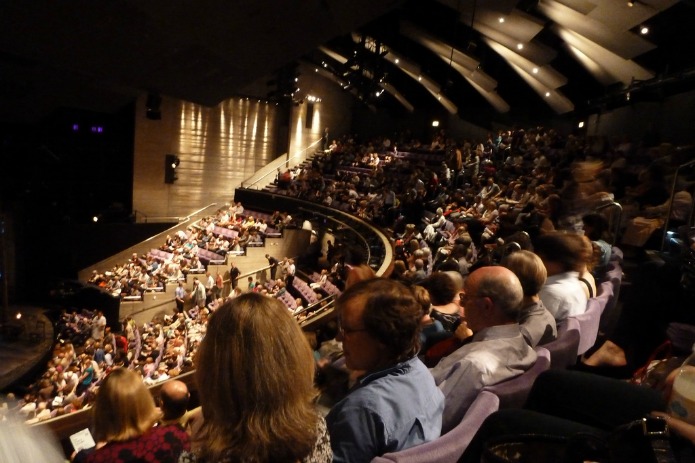 It has been more than 20 years now, since I came to London to join the famous Blue Badge Tourist Guide training. After dipping my toes in a few different careers, I am now where I was meant to be: showing visitors the best city in the world! 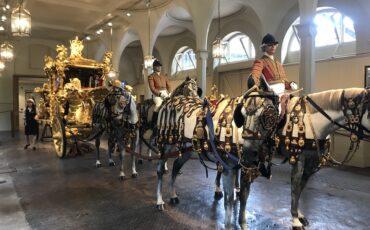 Visitors to London often want to go inside Buckingham Palace when they come there and see the Changing of the Guard ceremony. Yet, while Windsor Castle is open to the public throughout the year, the chief royal residence of London is only open for ten weeks between mid-July and September every year when the royal family are at Balmoral Castle. The tradition of spending the late summer and early autumn in the Scottish Highlands was established by Queen Victoria and Prince Albert and has continued since her reign. 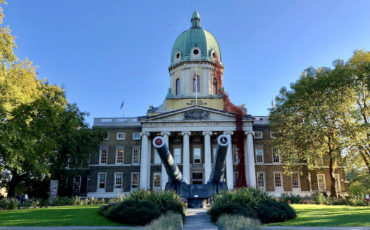