They may have to travel across an ocean to get here, but for Americans in London, home is never that far away. Britain and the United States have a long shared history, and there are many sites in London associated with America. They reflect the close political, cultural and military ties between the two countries. The term “special relationship,” often used to refer to the Anglo-American friendship, was first coined by Britain’s wartime Prime Minister, Winston Churchill, whose mother was American. Why not book a tour with a knowledgeable Blue Badge Tourist Guide and explore London’s transatlantic links?

Here’s a sampling of 15 London sites that will be of interest to American history buffs:

We’ll start in the eastern part of London, in an area called Rotherhithe. There’s a charming little pub here with great river views called The Mayflower. The name stems from this area’s connection with the defining moment of the founding of America. It was from near this site that the Pilgrim Fathers embarked on the first stage of their journey to the New World in search of religious freedom aboard the Mayflower in 1620. They went on to form the first lasting English settlement in New England at Plymouth, Massachusetts. The captain of the ship, Christopher Jones, lived in Rotherhithe and was buried at St. Mary’s Church near the pub. A memorial to Jones sits in the churchyard. Visitors to the pub who can prove a family connection to a Mayflower passenger are invited to sign the “descendants book.” 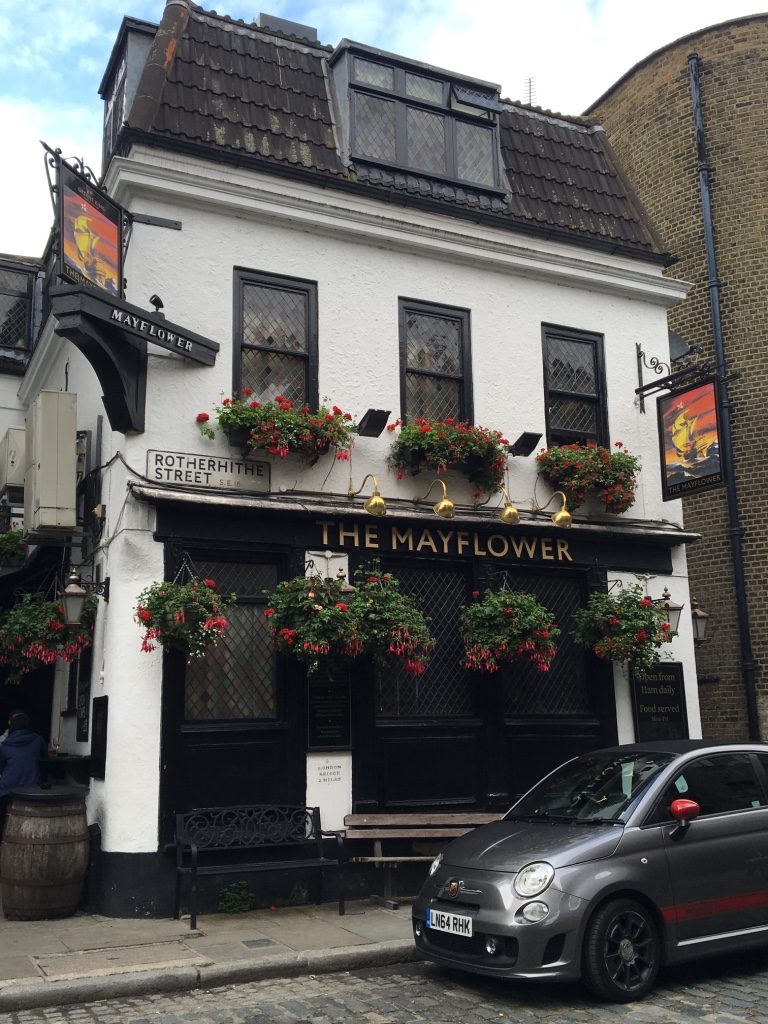 2. All Hallow By The Tower

Close to the Tower of London is a church with American links, All Hallows by the Tower. The 6th United States President, John Quincy Adams, married here in 1797. His British-born wife, Louisa, was the only foreign-born First Lady in history before Melania Trump. William Penn, the founder of Pennsylvania, was baptized here in 1644.

A bit further west along the River Thames is London Bridge, made famous by the nursery rhyme “London Bridge Is Falling Down.” But did you know there’s also a London Bridge in the USA? There have been a number of different versions of the structure, starting with a wooden crossing built by the Romans in the 1st century AD. The current London Bridge opened in 1973, replacing the previous one opened in 1831. That 19th-century bridge was deemed unfit for modern traffic, so city officials decided to sell it in the 1960s. An American oil tycoon bought London Bridge as a tourist attraction for a new town he’d founded called Lake Havasu in Arizona. The bridge was dismantled, shipped to Arizona and reconstructed piece by piece.

Not far from London Bridge on the south bank of the Thames is a reconstruction of the open-air Globe Theatre, where William Shakespeare acted for many years and where many of his plays were produced. You can’t really get more British than Shakespeare, and yet it’s thanks to an American that the Globe exists today. The original Globe Theatre opened in 1599. It was destroyed by fire in 1613 and rebuilt, then demolished in 1644. The American actor and producer Sam Wanamaker initiated the project to rebuild the Elizabethan theatre and worked tirelessly to bring it about. Wanamaker didn’t live to see the new Globe. He died in 1993, about four years before it opened. He’s honoured in the name of a smaller, candlelit theatre on the Globe site, the Sam Wanamaker Playhouse, which opened in 2014. 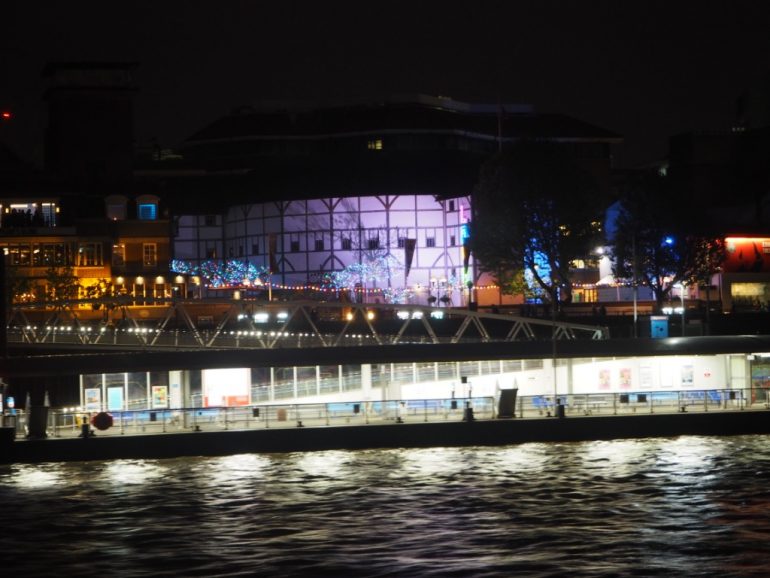 Our next two sites are in the City of London, the oldest part of the capital and its traditional financial quarter. Behind the Royal Exchange is a statue of a seated gentleman. This is George Peabody, a London-based American banker. Peabody built homes for London’s poor in the 19th century through the Peabody Trust. When he died in London, Peabody was interred for a month at Westminster Abbey, then his coffin was transported to America because he wanted to be buried in his hometown in Massachusetts. Before he retired, Peabody had taken on a partner named Junius Spencer Morgan. Their business evolved into the bank J.P. Morgan & Co.

Tucked away in a quiet corner of the busy financial district, off a street called Love Lane, is a small garden containing pieces of the stone foundations of a church. This was once the site of the Church of St. Mary Aldermanbury. Like many other City churches, St. Mary Aldermanbury was gutted by bombs in the 1940s. And like some of those other churches, this one was rebuilt…just not in London. In 1966 the church’s remains were shipped to Fulton, Missouri, where the building was reconstructed at Westminster College as a memorial to Winston Churchill. Churchill had made a famous speech in Fulton, where he used the phrase “iron curtain” to describe the postwar political landscape.

One of the most emotional connections between Britain and the U.S. can be seen at St. Paul’s Cathedral. Behind the high altar is the American Memorial Chapel, dedicated to U.S. servicemen who died while stationed in the United Kingdom during World War II. The stained-glass windows feature symbols of American states, and the woodwork depicts birds, plants and flowers of the U.S. The heart of the chapel is a large, leather-bound book: a roll of honour with 28,000 names. Relatives can find the names of loved ones with the help of cathedral staff.

Just northwest of St. Paul’s, on Holborn Viaduct, is St. Sepulchre-Without-Newgate. Captain John Smith was buried in this church. Smith was a founder of Jamestown, the first permanent English settlement in North America. A stained-glass window in the church commemorates him. There is a famous story of how Pocahontas saved Smith after his capture by Native Americans. He’s also the person who named New England. 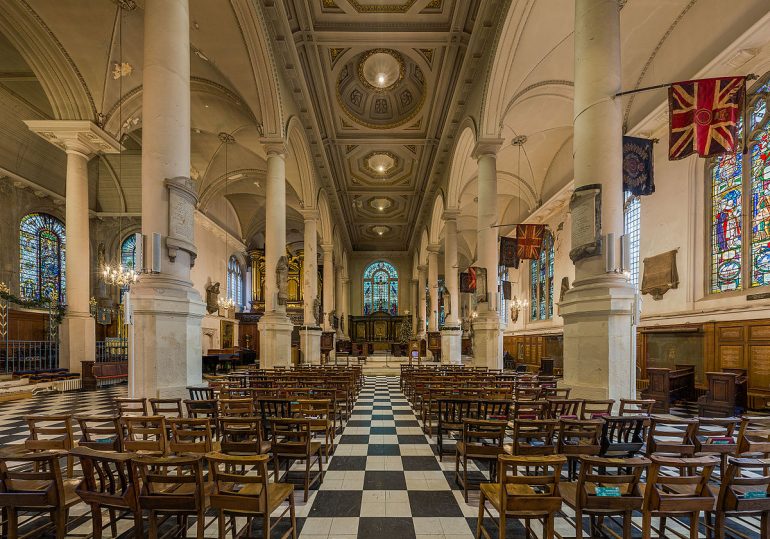 If you go on the Legal London Tour with a Blue Badge Tourist Guide, you’ll visit the Inns of Court, the rarefied enclaves where London lawyers trained and worked for centuries. Lawyers from the original 13 colonies often did their training in London, and the biggest proportion came from the inn called Middle Temple. Middle Templars were among the signers of the Declaration of Independence, and seven of them helped draft the Constitution. One of the latter was John Dickinson, who became governor of Pennsylvania in 1782. Dickinson is credited with coining the phrase “no taxation without representation,” which became a rallying cry of the colonies leading up to the War of Independence.

Not far from Trafalgar Square, on Craven Street, is a museum called Benjamin Franklin House. This was the U.S. Founding Father’s London home between 1757 and 1775. Franklin served at this time as a mediator between England and the colonies in the turbulent period before the War of Independence.

Did you know Texas was once a separate republic? Before it joined the Union in 1845, Texas even had its own embassy in London. The Texas London legation was located in Pickering Place, an alley near St. James’s Palace, in a building that also houses the prestigious wine merchant Berry Bros & Rudd. The Texas connection is commemorated by a plaque on the side of the alley entrance.

Grosvenor Square, the long-time site of the United States embassy, could be called the epicentre of American London. The Mayfair square became home of the official United States presence in Britain’s capital in the late 1780s, when John Adams, later America’s second president, served as the first United States Minister to the Court of St. James’s. His former house still stands at 9 Grosvenor Square. During World War II, General Dwight D. Eisenhower set up a military headquarters at 20 Grosvenor Square. This building also served as headquarters of the United States Navy in Europe. The square contains statues of presidents Franklin Delano Roosevelt, Eisenhower and Ronald Reagan. An Eagle Squadrons Memorial honours the American volunteer fighter pilots who fought with Britain in World War II. A peaceful garden at the square’s eastern end is dedicated to those who lost their lives on September 11, 2001. 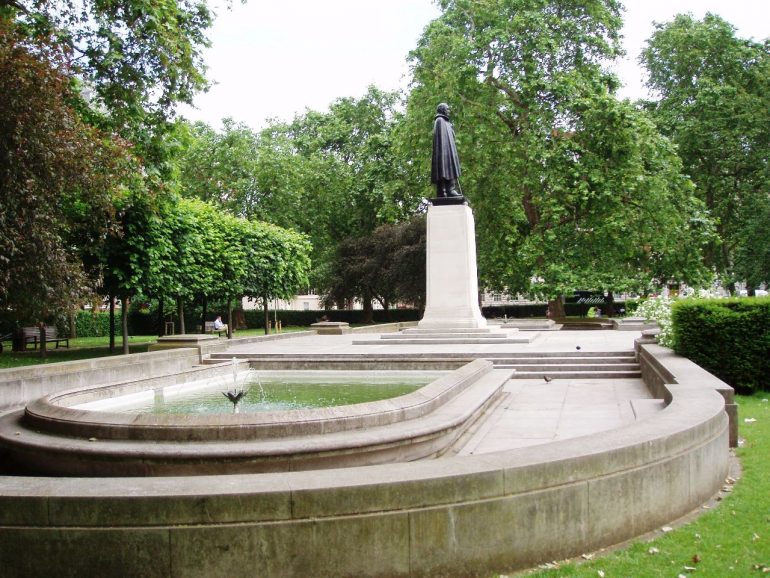 East of Grosvenor Square, on Brook Street, is the London home of the American rock musician Jimi Hendrix. He lived here in the late 1960s. The guitarist’s restored flat adjoins the 18th-century home of the German composer George Frideric Handel, and the properties are now a museum called Handel & Hendrix in London.

And from a rock god, we move to a retail magnate. Selfridges on Oxford Street is the United Kingdom’s second-largest department store after Harrods. It was founded in 1909 by the American Harry Gordon Selfridge, the subject of the 2013 television drama series “Mr Selfridge.” Selfridge, who began his career at the Marshall Field department store in Chicago, set out to show Londoners how to shop. His store was the first to have women’s toilets, and he brought the concept of browsing to London. He’s credited with coining the phrase “the customer is always right.”

West of Selfridges on Gloucester Place is a plaque marking the home of one of the most infamous Americans, a man whose name is synonymous in the United States with the word traitor. Benedict Arnold was a general during the War of Independence who later switched sides and fought for the British. He settled in London after the war and died here.

These are just some of the many places in London guaranteed to delight American history enthusiasts. Touring London with a Blue Badge Tourist Guide is a great way to explore sites connected with the birth of the United States, as well as those reflecting the modern ties between the two countries.

I’m an American who moved to London “temporarily” for a job almost 20 years ago. I fell in love with the city and chose to raise my family here and make it my home. 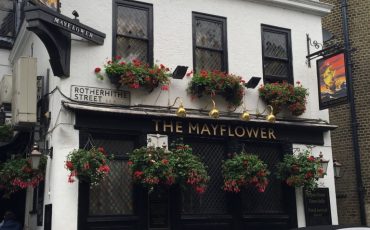 The Voyage Of The Mayflower

The Mayflower story has an almost mythological status in American history, particularly in the northeast of America where I grew up. Unfortunately, the story of Plymouth Colony traditionally has been told from the perspective of the Mayflower sailors. In fact, a sophisticated Native American society had long been established in Patuxet before English settlers claimed this land and renamed it Plymouth. 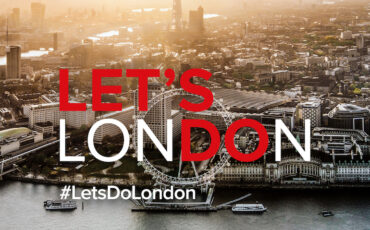