As Chief Raven Master, Chris gave us entertaining updates on the six plus one ravens currently residing at the Tower. Two females stood out – Merlina the diva, who has asserted her territorial rights on the lawn of the Queen’s House (complete with her personal, bespoke cage) and Munin, who once went AWOL, flying off to Greenwich, where she was spotted by an eagle-eyed Blue Badge Tourist Guide and members of the public and returned to the Tower after seven days. Known to the warders as “The Black Widow”, Munin has seen off two previous partners (both deceased) and has now paired up with the brave (foolhardy?) Jubilee.

Chris was keen to emphasise to us (and keen for us to emphasise to visitors) that the ravens’ wings are ‘trimmed’ not ‘clipped’, the process is akin to having a haircut. Far fewer feathers are trimmed than was previously the case, as this allows the birds more freedom to fly and is better for their psychological and physical health. He stressed that visitors should keep their distance from the birds and refrain from taking selfies with them; there have been some injuries recently, and it is important to appreciate that ravens’ beaks are capable of severing fingers.

For most visitors, the Tower of London is notorious as a place of torture, imprisonment and execution. We were fortunate to be able to visit Sir Thomas More’s cell in the Bell Tower. Whilst Sir Thomas was not physically tortured at the Tower, his books and writing materials were removed and the cell itself was comfortless, cold and damp due to its proximity to the River Thames. Executed by Henry VIII in 1535 for his refusal to take the Oath of Supremacy, Sir Thomas was subsequently canonised by the Roman Catholic Church in 1935; his cell has become a place of pilgrimage and pre-arranged visits are permitted. Interestingly, the cell which housed John Fisher, Bishop of Rochester (also executed for refusing the Oath and later canonised) was on the upper level of the same tower and markedly less austere, perhaps in deference to his ecclesiastical position.

This is also said to be where the Princess Elizabeth (later Elizabeth the First) was detained in 1554 by her sister Queen Mary on suspicion of treason and heresy. During her two months’ confinement, the Princess would almost certainly have had access to the Queen’s House itself, and to an exterior walkway (now called Princess Elizabeth’s walkway) where it is said she met her childhood friend Robert Dudley (later the Earl of Leicester) in secret. Even today, treading in her footsteps, one could imagine how the walkway afforded the imprisoned Princess some fresh air as well as views over the bustling City beyond.

Our final stop was the crypt of St Peter ad Vincula. Only a tiny part of it remains visible. It is here, in this small, enclosed white-walled chamber that memorials to Sir Thomas More and Bishop Fisher are found. Their remains, and those of Anne Boleyn, are reputed to lie behind its walls, along with dozens of other coffins, but their exact location remains uncertain.

The two hours at the Tower of London with Chief Raven Master, Chris Skaife simply flew by. We very much appreciated Chris’s great humour and patience in dealing with our questions, and the wealth of insights that he shared with us during our visit.

Originally a linguist (I am qualified to guide in French and German as well as English), I have spent over 30 years in the City as a fund manager, stockbroker and fund researcher. My interests are very varied and include Tudor history, finance and the City (I am also… 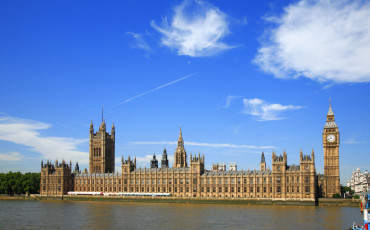 The Palace of Westminster is synonymous with politics in the United Kingdom and has seen some of the most momentous events in the history of the country. From the ill-fated 1605 Gunpowder Plot to speaker William Lenthall's defiance of King Charles I in 1642 and from suffragette Emily Davidson hiding in a ventilation shaft in the building to the inspirational "We shall fight on the beaches" Winston Churchill speech delivered to the House of Commons on 4 June 1940.