London landmarks and tourist attractions that begin with the Letter G

Hello and welcome the Guide London A-Z.  My name is Jacqueline Stater, and I’ll be looking at some of London’s landmarks and tourist attractions beginning with the letter G.

The Great Fire of London

The Great Fire of London devastated England’s capital and is one of the most famous events in the city’s history. Early on 2nd September 1666, a fire broke out in a bakehouse on Pudding Lane, and within a few days, the old City of London was a charred ruin. More than 1,300 homes and 87 churches, including St Paul’s Cathedral, were destroyed. Today you can stand in Pudding Lane and imagine the scene which was witnessed by the diarist Samuel Pepys when he climbed the steeple of a nearby church and described “the saddest sight of desolation that I ever saw.” The consequences of the fire were many, but perhaps most importantly, buildings in London were never again constructed in wood.

Shakespeare’s Globe Theatre is situated in a riverside area known as Bankside, which in the 16th-century was packed with inns, brothels, bear pits, and playhouses. So in 1599, when the lease ran out on Shakespeare’s original theatre on the other side of the river, the wooden building was dismantled and dragged across the frozen Thames to be rebuilt as the Globe on Bankside. “This wooden O” is Shakespeare’s vivid description of the Globe in Henry V, the play which opened the theatre’s first season. The Globe was destroyed by fire in 1613 and was lost to history until the American actor and director Sam Wanamaker dreamt of rebuilding the Globe. His dream was realised in 1997 when the Globe Theatre opened with Henry V, just as it had done four hundred years earlier. Today the season of open-air theatre runs from May to September.

Greenwich, situated six miles east of Central London, is the home of time and a place where you can stand on the World’s Prime Meridian with one foot in the Eastern hemisphere and one foot in the western. Greenwich has six museums, some of the finest historic architecture in London, and a wonderful range of shops, markets, and restaurants. It is a UNESCO World Heritage site and also boasts one of the oldest Royal Parks in London.

The National Maritime Museum Greenwich is one of the largest such museums in the world. From a giant ship in a bottle to the uniform worn by Admiral Lord Nelson on the day he died at the Battle of Trafalgar, this museum has something to interest everyone.

The Cutty Sark sailing ship is the last surviving tea clipper. Built in 1869, she raced to get the first crop of tea from China to London. The ship has been welcoming visitors to Greenwich since 1954. During recent conservation work, the Cutty Sark was raised by three metres, allowing visitors to walk underneath her hull.

The Old Royal Naval College Greenwich started life as the Royal Hospital for seamen, effectively a retirement home for mariners, and eventually became an elite training centre for naval officers. The buildings were designed by Sir Christopher Wren at the end of the 17th-century on the site of the Tudor royal palace where Henry VIII and Elizabeth I were born. Today the site is home to the University of Greenwich.

The Old Royal Naval College includes the neoclassical Chapel of St. Peter and St. Paul and the Baroque Painted Hall. The Painted Hall boasts one of the most spectacular Baroque interiors in Europe and has been described as Britain’s Sistine chapel due to its incredible ceiling and wall decorations. You may recognise it from the dozens of films and TV programmes filmed here include The Crown, Skyfall, Mission Impossible, and the Pirates of the Caribbean.

The Gherkin has commanded London’s ever-changing skyline since 2004. It is perhaps the most distinctive product of the city’s millennium building boom and has managed the twin success of gaining many awards for contemporary architecture and proving immensely popular with the public. This 40-storey, 180-metre office complex was designed by Norman Foster, one of Britain’s truly outstanding architects. Foster describes the Gherkin as “London’s first environmentally progressive tall building.” At the very top, The Helix restaurant offers sky-high dining with breathtaking panoramic views over the City of London.

These are just some of the tourist attractions that you can find in London, beginning with the letter G. My name is Jacqueline Stater. Check out my profile at our website guideLondon.org.uk. Please subscribe to our YouTube channel and join us as we explore the A-Z of Guide London.

I have been showing visitors all that London has to offer for more than 20 years and my guiding style is best described as “quintessentially English”. I have a deep love of London’s traditions and Royal history and I genuinely enjoy passing on my knowledge, especially to families and… 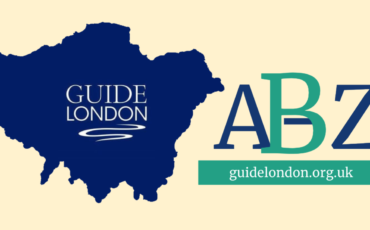 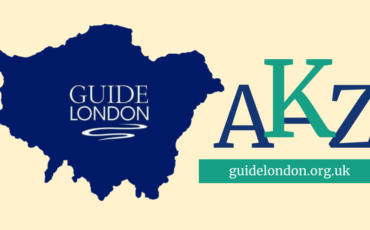 How many London landmarks and tourist attractions can you name that start with the Letter K? Blue Badge Tourist Guide Linda Hamer continues our Guide London A-Z video series and provides insights on the historical events, famous and not-so-famous landmarks in London starting with the Letter K.