The Fourth Plinth is the world’s most famous public art commission. A statue of King William the Fourth was originally meant to stand on the empty plinth in front of the Sainsbury Wing of the National Gallery of Art but this was never constructed due to a shortage of funds and the fact that William, the so-called ‘sailor king’, had a short and fairly undistinguished reign (1830 – 37) before passing the throne to his niece, the famous Queen Victoria, who has many statues, not only in London but around the globe. 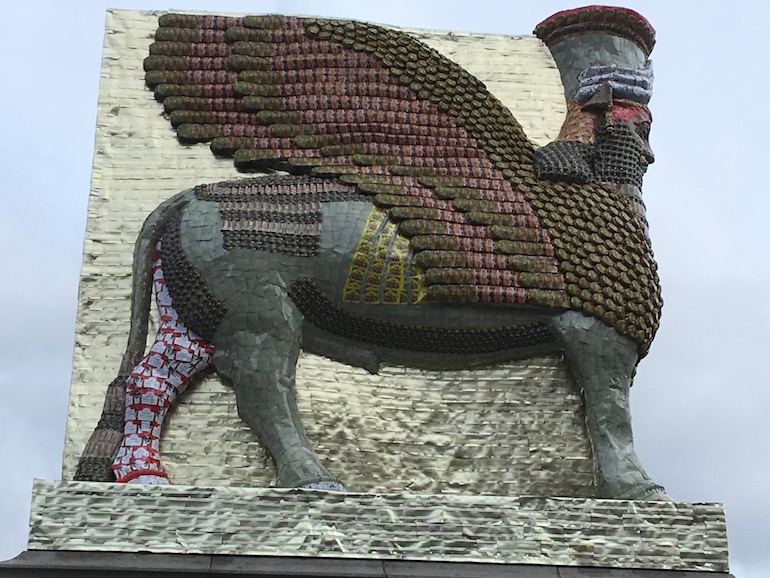 Trafalgar Square Fourth Plinth: The Invisible Enemy Should Not Exist by Michael Rakowitz.

It was Prue Leith who wrote to the Evening Standard back in 1994 suggesting that something should be done about this empty space in heart of the capital city of the United Kingdom. Leith is a well-known food writer and has taken over as the presenter of Channel Four’s popular Great British Bake Off television show. She was then chair of the Royal Society of Arts and her letter led to a commission being established under the equally distinguished writer and lawyer John Mortimer to find a use for London’s most famous empty space. It was decided that a rolling commission of new artworks would fill the space.

Amongst the most famous occupants of the Fourth Plinth was an upside down perspex model of the plinth itself by London artist Rachel Whiteread, who specialises in using plastic materials to represent empty spaces and who has recently had an exhibition of her work at the Tate Britain gallery. Other works on display on the plinth include Cock by Katharina Fritsch, a bright blue cockerel which symbolises “regeneration, awakening and strength”, and Ecce Homo by Mark Wallinger, a representation of Christ wearing only a loincloth and crown made of barbed wire instead of thorns. Blue Badge Tourist Guides will probably remember Anthony Gormley’s One and Other installation which showed a variety of real people occupying the plinth for an hour each, one of them being a guide taking calls and arranging tours on her phone. 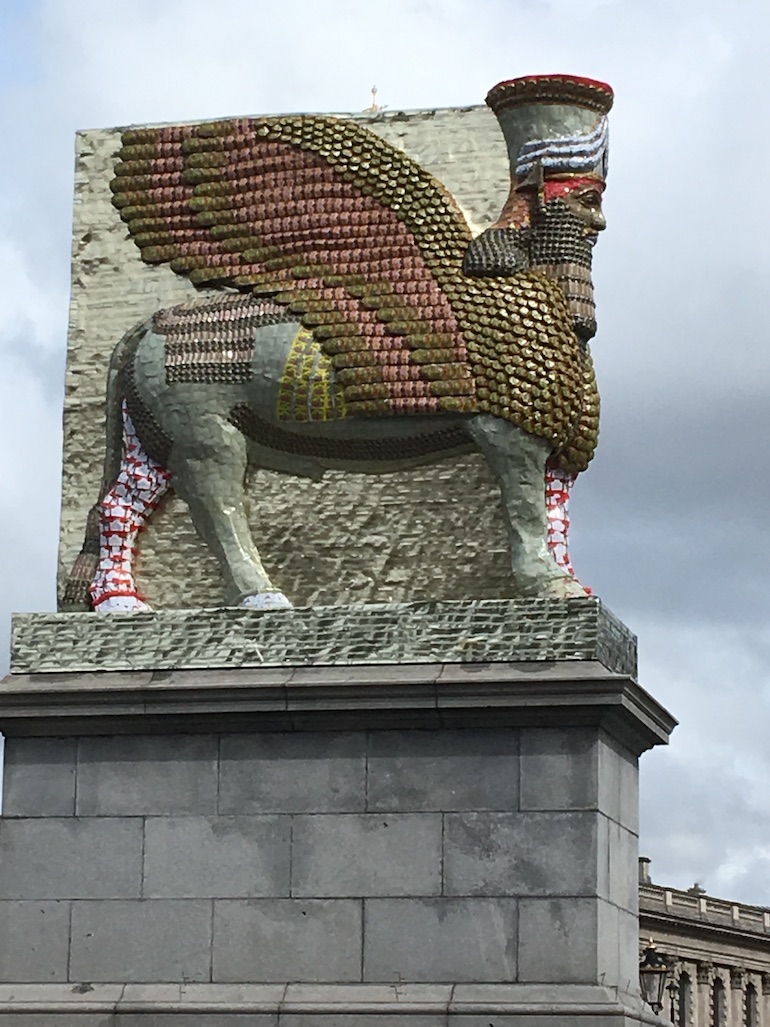 Trafalgar Square Fourth Plinth: The Invisible Enemy Should Not Exist by Michael Rakowitz.

Sadiq Khan, the first Moslem mayor of a major western city, unveiled the latest Fourth Plinth artwork on 28 March this year. It is entitled The Invisible Enemy Should Not Exist and is by the American-Iraqi artist Michael Rakowitz. This is a representation of the winged deity called Lamassu which stood at the Nergal Gate of the ancient Assyrian city of Nineveh, near modern-day Mosul. It is made from 10,500 cans which previously held date syrup, an important product of an Iraqi industry devastated by the recent warfare. The original sculpture was destroyed by ISIS in 2015 and Rakowitz’s work is intended to encourage a symbolic rebirth of the city’s past, present, and future. It is just one part of a project aimed at recreating the estimated seven thousand artworks destroyed in Iraq in recent years, either deliberately by ISIS or as an unwanted by-product of the war which started after the American invasion of the country in 2003. 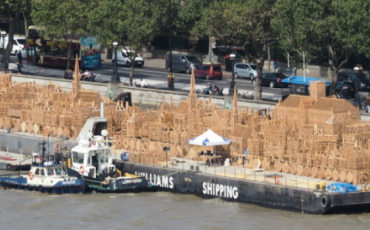