In 1889 the docks in East London were hit by a strike which captured the imagination of the whole of Britain, indeed many parts of the Empire would feel the effects in the long term of the ensuing events. Thousands of dock workers went on strike, their demand being the famous “dockers’ tanner” and changes in the way they were hired. It was the casual labourers who were at the core of the strike, having to compete against each other to be contracted for a few hours or one day only at a time. They were at the mercy of employers who frequently and habitually hired and fired at will, job security was an unknown term. Feeding a family was a grim, daily challenge.

The strike began on 12 August 1889, e.g. 125 years ago, and a largely peaceful strike movement helped the strikers, led by Ben Tillett, gain much needed support. Ben Tillett, General Secretary of the Tea Operatives & General Labourers’ Association, had been inspired by what Annie Besant had achieved with her Matchgirls Union. Tillett explained the dockers’ treatment: “We are driven into a shed, iron-barred from end to end, outside of which a foreman or contractor walks up and down with the air of a dealer in a cattlemarket, picking and choosing from a crowd of men, who, in their eagerness to obtain employment, trample each other under foot, and where like beasts they fight for the chances of a day’s work.”

Crucial financial help to the strikers and their families arrived from the Australian Labour movement, aid without which the strike might not in the end have been won. The employers – divided amongst themselves – came under pressure from the ship owners and eventually began to reluctantly reconsider. Cardinal Manning led successful conciliation attempts which helped to bring an end to the strike on the 14th September. The dockers finally got their tanner from the 4th November, and their major terms were met. Beatrice Potter wrote in her diary: “The dock strike has ended in a brilliant victory to the men; all their demands (with the exception of fixed times for taking on) conceded – the concessions come into force in November.”

It was a major victory for ‘New Unionism’, meaning that trade unionism spread from skilled groups of ‘labour aristocrats’ to the sphere of the semi-skilled and unskilled worker. The Great Dock Strike led to unskilled workers throughout the UK beginning to feel more confident in their ability to act collectively and trade union membership grew from 750,000 in 1888 to over 2 million by 1899. 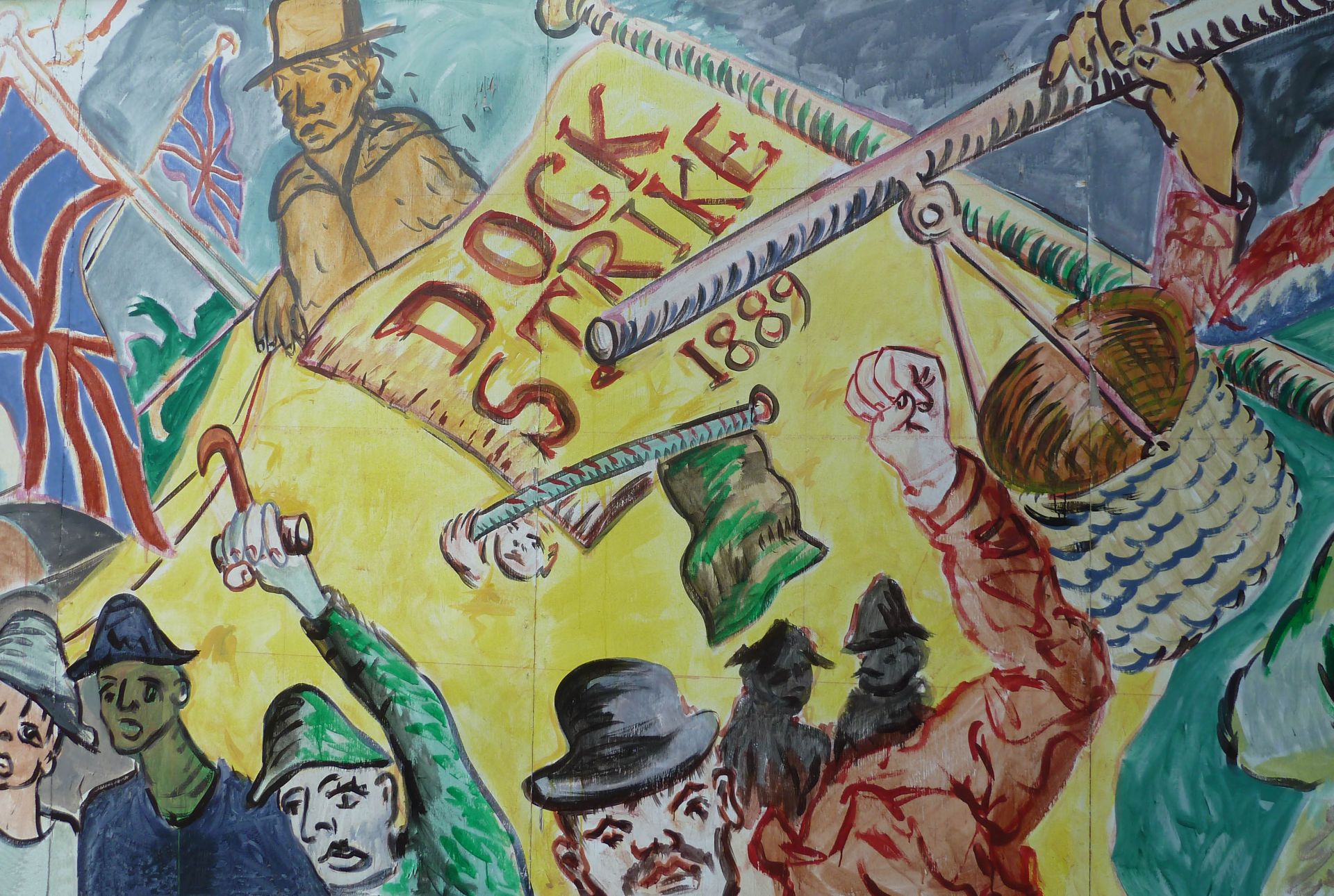 This is a brief summary of a few very dramatic weeks 125 years ago that of course include fascinating details and anecdotes, all once happening on our very own doorstep. Events that nevertheless are of huge consequence to employment legislation in general and the trade union movement in particular. This is why UNITE, following on from last year’s successful Match Girls’ Strike events, has decided to commemorate the Dockers Strike of 1889 with a whole Festival of events, lasting throughout the year and into 2015 but with its main emphasis from 12 August to the 14 September 2014.

Explore the streets of the old East End and hear the extraordinary story of the 1889 Dockers Strike and the role in its resolution of Cardinal Henry Manning, Roman Catholic Archbishop of Westminster. Why did this well-bred, quintessential English establishment figure concern himself with “outcast” London in the shape of the casual day labourers of the London Docks, struggling for people’s rights? An intriguing tale will unfold on this walk that finishes at Shadwell DLR.

We start at the southern tip of the Isle of Dogs, with fine views of Greenwich, and a glimpse of the historic ferry terminal. See where Brunel’s Great Eastern was built, walk through Millwall Dock and trace associations with the stevedores’call-on labour system, and the 1889 strike in support of the ‘dockers’ tanner’. As we approach the South Dock, we’ll bring the story of industrial relations into the second half of the 20th century. We will see fine 18th century dock buildings as well as dock cottages and pubs, and look at how ships entered and left the docks. We finish at Canary Wharf, where commerce has spectacularly replaced the traditions of London’s docks.

There was shipbuilding at Rotherhithe in the 15th century and in the 1690s London’s first enclosed wet dock was built here in what became a complex of docks handling whaling and timber cargoes. We explore Rotherhithe’s connection with the voyage of the Mayflower, hear about Marc Brunel’s pioneering 1840s tunnel under the Thames, and find out what happened to the Grand Surrey Canal project. We’ll see riverside pubs, evidence of the Scandinavian communities associated with the Vikings and with the timber trade, and there will be political tales, not least about the dedication of socialists Alfred and Ada Salter to the area in the first half of the 20th century.

Limehouse in the 19th century – seamen arriving at the London docks from China, India & Africa would have caused much interest but in an economically deprived part of London, the welcome they received would not always be warm. On our walk we hear about the Strangers who were stranded or escaped the harsh life at sea, of their struggles to settle down and how their lifestyles have come to be part of the multicultural fabric of London. Visit the area of London’s first Chinatown, hear of Indian princes and the contribution made by the Strangers when London needed them most. We end at West India Docks, where the echoes of its past resonate amongst the new office buildings that define Canary Wharf.

Saturday 30 August 2.00 pm – Royal Docks – the End of an Era  led by Tina Engström – meet at the entrance to Pontoon Dock DLR.

Join me on a fascinating walk around the Royal Docks – the last docks to be built in London and the last to close. Learn about the history of the Docks and the Dockers strike in 1889 from the SS Robin Heritage Mural and get a glimpse of the oldest complete example in the world of a steam coaster. Find out how the Thames Barrier protects London from flooding and get a view of one of the world’s largest sugar refineries. Walk across Victoria Dock for a great view of ExCel, the Crystal and the derelict Millennium Mills, and hear about the future plans for the Royal Docks area.

Sunday 7 September 2.00 pm – The Events and Developments of the Dockers Strike led by Kim Dewdney – meet at West India DLR.

Dock work in 1889 was hazardous, casual and poorly paid and the dockers were agitating for change. Their opportunity came when the owners of the West India Dock cut the amount paid for unloading the ships and precipitated the Great London Dock Strike. Trade Union heroes such as Ben Tillet and Tom McCarthy would lead their men in gaining the “Docker’s Tanner” – a rate of 6d an hour and international solidarity would be crucial in seeing the fight through to the end. Our walk will take us through the locations at the heart of the strike and tell the story of the men – and women – who picketed, stayed loyal and, ultimately, succeeded in improving the lot for themselves and future dockers.

Coinciding with the anniversary of the end of the strike on 14 September 1889, explore the historic West India Dock and the Canary Wharf development relating the amazing but disturbing story of the rise of one of London’s great dock complexes and its decline and replacement with a new business district. Amazing tales from the Slave Trade, the headquarters of Lehman Brothers on to the coming of Cross Rail. The walk ends at Canary Wharf station.

HOW TO BOOK TICKETS:

Tickets for the walking tours are £10 per adult. Under-10s go free but all children under 15 must be accompanied by an adult. A group ticket for 10 people is available at £90. These tours are open to everyone so please bring friends and family and suggest to your clients for a unique experience.

Please book your ticket online via TicketSource.  You can print them at home, have them sent to your phone or have real tickets sent to you.  For further details and to add comments, please check out the Dockers Festival Twitter and Facebook pages. 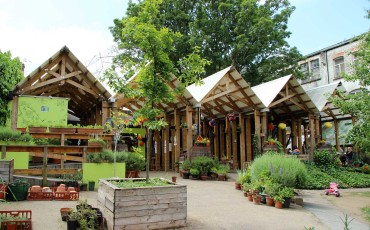 This year’s Open House London programme on 20-21 September sheds light on the latest contemporary architecture, from the newest completed city building The Leadenhall Building (The Cheesegrater”) by Rogers Stirk Harbour + Partners, to Kew House, a striking transformation of a 19th century brick stables into a corteen steel façade. 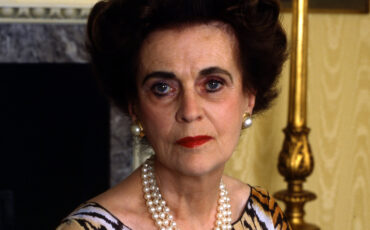 A Great British Scandal: The London Of Margaret Campbell, Duchess of Argyll

Margaret, Duchess of Argyll, was a name that everyone knew at the time of her divorce in 1963 but during her lifetime she had three names, each one making her a legend, Margaret Whigham, Margaret Sweeny, and when a Duchess, Margaret Campbell.