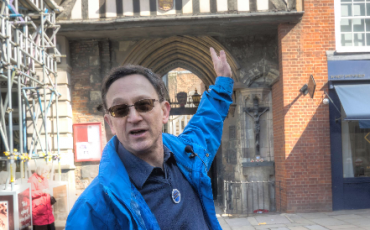 PUBLISHED 2016 IN UK AND N AMERICA: 'The Blue Badge Guide's London Quiz Book'. Available in good bookshops in paperback, also on Amazon and as an e-book.

'I just wanted to reach out to you and thank you for such a wonderful experience. Mark was a great tour guide and we enjoyed spending the day with him!' (MC, Texas, USA)

'Mark King is possibly the best tour guide I have EVER had. Extraordinarily knowledgeable but able to share his knowledge in such a way that makes sense to the "unenlightened"! He is articulate, extremely well rounded and very personable. A triple threat!! IT also turned out that I was the only one on the tour. So it was a wonderful treat to have Mark all to myself for 3 hours. I peppered him with a zillion question. The tour was absolutely fascinating.' (KA, California, USA)

'Our tour guide, Mark, was fantastic. His knowledge of WWII history was remarkable, we enjoyed his tour [of the Churchill War Rooms] and would recommend it to anyone.' (SG, N. Carolina, USA)

'I want to thank you so much for being a wonderful tour guide on our trip to London. I can’t imagine how one person can know so much about so many things, but it was all incredibly interesting to us, and just the type of vacation experience we were hoping for. I also appreciate your patience in working with me in advance to plan the trip. I know that I get a bit crazy about trying to fit it way too much, and your advice was very much appreciated. i think I completely wore my family out, but they tell me that there is nothing that they would have wanted to drop off the itinerary.' (CE, Boston, USA)

'Many thanks for the walking tours during the Summer School. They were so appropriate and informative and the students really benefitted from them.' (HG, London, UK)

'Mark's bespoke tour around the City of London was as informative about the history of the City - fascinating - as well as current affairs, showing how professional a Blue Badge guide must be. Adding to their knowledge all the time as well as answering endless questions! Planning our next walk with Mark.’ (SB, London, UK)

'We visited London for a company team building day. I planned the World War One Zeppelin Raid walk with a BB Guide. The walk starts from Holborn Station and ends at Liverpool Street Station. Mark kept the group engaged throughout the whole walk and we all found the walk interesting. The amount of knowledge he knew was unbelievable and he provided us with a tour that took nearly 3 hours. He even went out of his way to show us a suitable place for lunch. I highly recommend Mark, he will give you a tour that not only meets your needs but will also leave you wanting to know more. Thanks for a excellent day!!'

'Had a great tour at the Royal Courts of Justice with Mark King. I visited with a group of Pathways to Law students from the University of Exeter and Mark accommodated us extremely well - the students found it very interesting and even had a chance to watch a case later on in the afternoon. Recommended!' (KB, Exeter, UK)

'I thought you might like to know that our international group really enjoyed the tour. A number of them told me they found the areas we visited extremely interesting - two went back to Spitalfields in the afternoon. They also particularly praised your commentary - both the detail and the clarity.  Several said that they understood every word and they also liked the way you drew it all together at the end.' (AA, London, UK)

'A huge thanks for a thoroughly enjoyable afternoon. My clients really enjoyed themselves and I hope you did too. I'd certainly like to make this a regular thing if you don't mind.' ( LW, London, UK)

Welcome to London! Just like you I love travelling to enjoy unique experiences and insights with an enthusiastic local guide.

Building on the excitement since London 2012's Olympic & Paralympic Games, Queen Elizabeth II's Diamond Jubilee and royal weddings and births of princes and princesses, I look forward to introducing you to more of the London region's great sights, events and experiences in 2018.

First, the ‘classic’ attractions - Tower of London, Crown Jewels, Westminster Abbey, St Paul's Cathedral, British Museum, Greenwich, Buckingham Palace, Houses of Parliament, Borough Market. Next, there are newer attractions that include stunning views from additions to London's architectural skyline: London Eye, View from The Shard, Heron Tower, The 'Walkie-Talkie' with its Sky Garden, the Bloomberg Building and Mithraeum and the new American Embassy, as well as several other notable buildings in the City of London that will be completed this year. Queen Elizabeth Olympic Park's Orbit viewing platform has added a thrilling helter-skelter ride. Tate Britain and ‘hidden gems’ Kenwood House, Apsley House and the exciting new Blavatnik Building at Tate Modern are worth a visit.

I have led a wide variety of walks in several outer and inner boroughs of London, including the City of London, Barnet and Camden.

Going back in time and farther out of central London, Henry VIII's 500-year old Tudor palace at Hampton Court never fails to delight. Windsor Castle is an unforgettable royal location that also hosted the weddings last year of Prince Harry and Megan Markle and Princess Eugenie and Jack Brooksbank. Stonehenge, Salisbury and Bath are impressive 'must see' sights. Oxford's Bodleian Library and the Ashmolean Museum are worth including on your visit to this beautiful university town, as well as nearby Blenheim Palace and Winston Churchill's burial place at Bladon. I'd be delighted to take you around any or all of these.

My predictions for visitors to England in 2019? I look forward to increased interest from visitors in:

* TV and film locations headed by global hits including JK Rowling's franchises Harry Potter and Fantastic Beasts, Downton Abbey, James Bond 007, Dr Who, Sherlock Holmes, as well as Hollywood and Bollywood films and Amma Assante's film 'Belle' about the life and times of Dido Elizabeth Belle at Kenwood. Oscar-winning film 'The Favourite' starring Olivia Colman as Queen Anne was shot in stunning locations near London that include Hampton Court Palace and Hatfield House.

* A wide range of themed tours relating to World War One - the 'Great War'. How about walking one of the central London Zeppelin raid routes or taking a guided visit of the WW1 galleries in the Imperial War Museum or the RAF Museum in Hendon?

* Heading out of London to meet your ancestors at English Heritage's excellent Visitor Centre at Stonehenge, a UNESCO World Heritage Site. Understand the area's story including Durrington Walls and Woodhenge, and burials in long- or round-barrows.

Born and raised a Londoner, I've been fortunate to live in Oxford and Dorset, as well as to work overseas in France, United States of America, Czech Republic and Russia. I've enjoyed visiting or living in several great cities but nothing compares with London - quite simply, this is the world's most fascinating city!

Born and raised a Londoner, I've been fortunate to live in Oxford and Dorset, as well as to work overseas in France, United States of America, Czech Republic and Russia. I've enjoyed visiting or living in several great cities but nothing compares with London - quite simply, this is the world's most fascinating city!

Please contact me to start discovering together the secrets of London's exciting past, present and future... 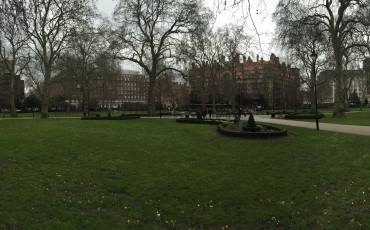